GroFin is pleased to announce that it has won the 2018 Islamic Economy Award in the ‘SME Development’ category. The winners were announced at the Awards ceremony held in Dubai this Wednesday 30 October 2018.

The Islamic Economy Award is managed independently by Thomson Reuters and is adjudicated by an esteemed judges’ panel based on formal, established criteria.

GroFin was represented by its Regional Investment Director for the Middle East and North Africa region, Mohamed Hawary, who collected the award on behalf of the company.

“This award is testimony to the efforts made by GroFin to ensure its products are accessible to one and all. We, at GroFin, are determined to provide our clients with financing that respects the customs and beliefs of our clients,” says Mohamed Hawary. 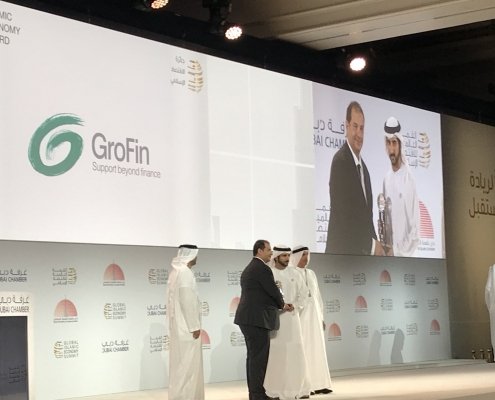 The Islamic Economy Award is held every year and has the following categories; Money and Finance, Media, Food and Health, Waqf and Endowments, SME Development, Islamic Economy Knowledge Infrastructure, Islamic Arts, Hospitality and Tourism, and the Lifetime Achievement Award.

GroFin is a pioneering private development financial institution specialising in financing and supporting small and growing businesses (SGBs) across Africa and the Middle East. We combine medium term loan capital and specialised business support to grow SGBs in emerging markets. By successfully combining medium term loans and specialised business support delivered through our local offices, we have invested in over 700 SMEs and sustained over 88,150 jobs across a wide spectrum of business activities within the 15 countries in Africa and Middle East that we operate in. GroFin has its headquarters located in Mauritius.